We're back with a brief overview of the new Yellow Draft Box 4 exclusive cards and reprints! With the Regionals over the weekend, this edition is being uploaded later than usual - apologies for that!

I think the yellow in this draft box has a bit more synergy than the other colours. Bardock's Crew is getting another look in, with the ape support to go with it!

As you can see, the people who have been trying to make Bardock's Crew work now have more to work with. A blue/yellow version of that deck has been floating around, but it doesn't really make much of an impact. With these new "Crew" cards, will that change? Only time will tell.

In the draft format, the ape package will provide a hell of a lot of pressure. March of the Great Ape is still a fun card, and there are four targets in the draft box that we know of, so it could work well. I can see it being great in that format, but in constructed I don't think this is enough to pull it into the limelight.

The new Fasha is just the yellow version of the 5k combo buff a battle card. Shugesh is decent "removal" for draft. Borgos will go excellently in U/Y Bardocks crew, but in draft it will be filler.

Final Spirit Cannon is an interesting card. As I've mentioned previously, I love cards that give you options. The fact that you can rest any of your opponent's cards during your turn makes it very strong in the right circumstances, however 2 energy is a steep cost in a lot of cases. It acts as removal also. I could see this being played in the U6 variants if people can find room.

The new SR Great Ape Bardock, Raider's Fury is great value for two energy, but it could brick your hand hard if you run too many. I can definitely see this played in both draft and constructed formats. Similar to a Scientist Fu type card.

Great Ape Son Goku, Saiyan Instincts is a beautiful card IMO, the art is so awesome. Not only is the art nice, it's also a very unique card. We have seen a few cards that activate from the drop area, but this one is different. It happily sits in the drop waiting for you to be at a loss for plays, and just need that extra draw. This will help a lot against hand destruction decks, or when going for that extra push when you already have bodies in play. I like this card a lot, and look forward to seeing how players utilise it's unique skill.

More skill less support! Pan, Natural Fighter is an excellent tech card in skill less builds. Having the ability to add a blocker to your board on your opponents turn is always good, and being able to give 5k + critical to a 10k skill less provides more incentive to use them in the first place. Tights is more great tech for yellow skill less. A cantrip that also buffs a battle card. If only it cost one energy.

Some more Frieza Clan cards in yellow will be released, with another lackluster Chilled card leading the line. This card will be decent to good in draft format where you will regularly get up passed 5 energy, especially with Final Spirit Cannon if you manage to snag that. In constructed however, this card is a throwaway. Too much setup required unless you are playing a leader like Yellow Broly: BR, and even then there are better things to use to fill your deck than this.

Mecha-Frieza, The Returning Terror will be excellent in draft, providing removal and pressure for four energy.

Frieza, Cry of the Sovereign - now this is what I'm talking about. Love this card. A battle card that can be combo'd with for free, and also activate an effect on combo if the user needs it, by paying two yellow energy. This is what Godstrike Beerus should have been. We need more cards where we aren't punished for having them in our hand if they aren't needed. This will be a yellow staple, at least in side board if not main.

Big Frieza is a decent card for draft, not much else to say about it.

If it was ever in doubt - resting your opponents cards is what Yellow does. They are hammering that home in this set.

It's cool to see more Vegeta: Youth cards, so Vegeta, the Kings Son is a nice addition. Decent control of your opponents board, and I can see it possibly seeing play. It won't make a massive impact though.

Paternal Bonds is an interesting counter. Simply for the fact that you can rest ANY card on your side of the board to get it's secondary effect. Even a field card like Planet Vegeta that doesn't need to be in active.

Now this card is very interesting. Very RNG heavy. Let's start by saying - wow, that card art is incredible. I can't wait for this card just for the art alone! As for it's skill, being able to shuffle your opponents deck is pretty crazy, especially in a deck like the New U/Y Hiru doing the rounds, so it might see play just for that. The second part of the skill is just a bonus. If the card on top of your opponents deck is a battle card, the card get's Double Strike & Dual Attack. Now if you play this in a deck that can put battle cards on top of your opponents deck, then it's pretty much a guaranteed hit. I like it, and I'm interested what people come up with using this card!

This is the card everyone's talking about. I personally don't think it's that strong, but I may be proven wrong. The fact that it only effects battle cards in the battle area (as we know, if a skill refers to "battle cards" then it is referring to battle cards in the battle area), and also effects the users battle cards, makes it a rather hard sell for me. Players are talking about using it in Shenramp, and I guess pulling it out when you have 6 energy would help you survive until you get to the 7 energy sweet spot. Problem is, you'd then need to get this off the board for your kill turn. Definitely doable since it has zero combo cost, but it's something to think about. Happy to be proven wrong in practice of course.

This card is reminiscent of Chain Attack Trunks, although Bandai have obviously learned their lesson there. It's definitely playable. Off the top of my head, a scenario where it could be decent is to use it to play Kid Goku, Unbreakable Will which effectivle provides 3 blockers for 3 energy. Something to think about. 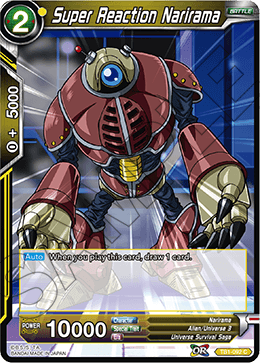 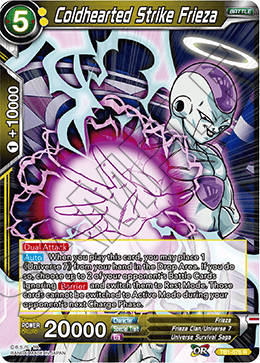 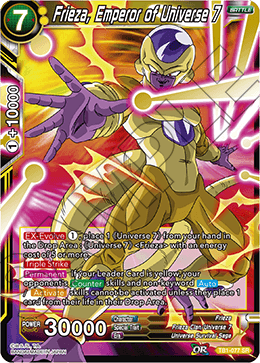 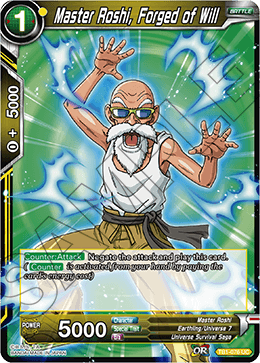 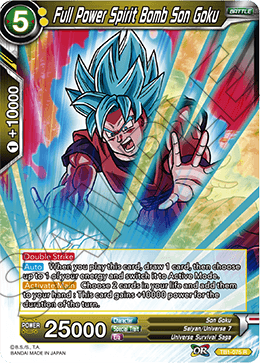 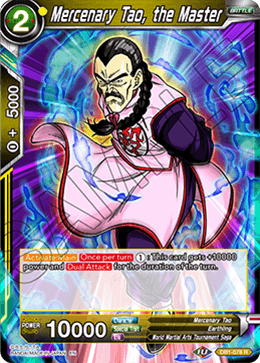 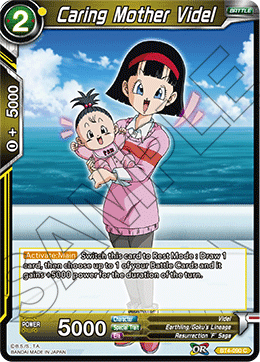 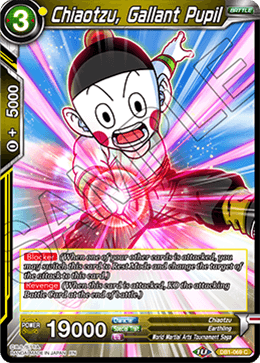 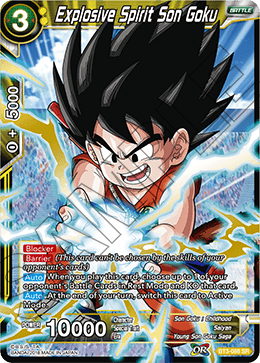 These are the last of the cards - I don't think any of them deserve their own spot in the list. Explosive spirit is obviously a decent reprint, although it's usefulness has dropped since Shugesh was banned.

Tao and Chiaotzu are take it or leave it cards. Having a revenge blocker that doesn't die to 5k negs is cool, but not worth 3 energy.

More Universe 7 reprints, obviously supporting the U7 in the other colours in this box. Cool.

Videl and Narirama provide draw. Narimara is a target for the aforementioned Gine in draft, which is... okay i guess.

Okay, that's it for Yellow! We'll be back in a few days with an overview of the next reveal!