Big Bans and Essential Erratas - What this means for the game

What's up guys! We're back with a special edition. Bandai has just released the ban/errata list for set 10, and it contains some doozies thats for sure! In this article I'll go over what the bans where, and why the chose to ban the cards that they did. I'll also talk about what this means for the game going forward.

So we'll start with the bans. The first one on this list is a card that people have been calling to be banned since it was released 5 sets ago, and I for one can't complain that it's finally been dumped.

This card is a card in the catagory I like to call "mistakes". Cards that were broken when they were printed for one way or another. Now this card was much more threatening when it could be played for free with World Peace, but even when played for 5 energy, it shouldn't have been as powerful as it is. This card has Deflect & Barrier, and completely destroys your opponent's gameplan as well as generally ends the game when it comes out. The main issue for me is that there was no sure fire way to interact with it and stop it from being played, or defend yourself against it. Boss cards are boss cards, but I don't think there ever should be a card that can't be stopped 95% of the time. All in all, this guy is gone and I'm happy about it. The only thing that dissapoints me a tiny bit is that I think a blue yellow Gotenks deck including this bloke would have been fun!

This was somewhat surprising, but not unwarranted. 21 was an oppressive card, but that isn't really why I think it was banned. The main thing this card did was that it really disuaded players from making any mono coloured decks that weren't hyper agro like Buu. Having a hard counter to an already weaker deck type is and always will be a bad idea. That combined with the fact that set 10 is all about mono decks again makes this a very good call. Now players can build mono to their hearts content without the fear of coming up against one of these monsters. I feel that Blue/Green now needs another boss card as there really isn't anything that fits the bill, but they'll have to be content with the multitude of mono bosses for now. 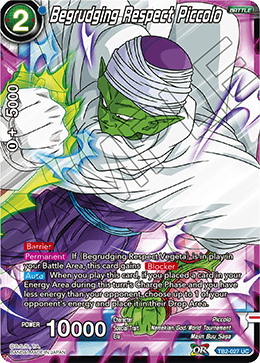 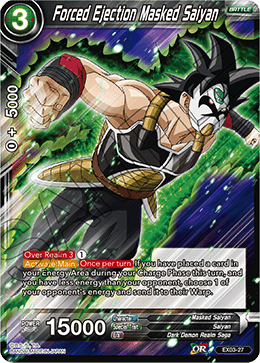 These are another surprising addition to the banlist. These guys both punish your enemy for adding cards to their energy using skills. Since set 10 has a huge amount of cards that do this, Bandai didn't want people to focus on cards like this and worry about using the energy cards. Fear not though, Dende still does it's job in this department, so there is still a counter to ramp.

This is one ban I saw coming a mile away. Turles was just too ridiculously cheap and oppressive to be allowed to hang around. Having two 15k swings with the potential of using his skill to play even more bodies, all for free, is just too much. Buu and Hatchyyack don't need him, and while he was nice to have, they will survive without. This does mean there is one less way to put a u3 card in your drop and one less way to play green Beerus, but that is likely why he got the chop in the first place.

I'm actually disappointed with this ban. I really get why all the others are on this list, but this one, while I understand why, I don't feel it was needed. I also like playing Zamasu so I'm biased. PFD was a lacklustre card in general since it's release because it was pretty much dead early game. With set 10, the new Zen-Oh super combo meant that you could charge this early game, then just put it back in your hand if you needed it, and also keep reusing it to ramp. So I get it, I just don't like it. I don't think Zamasu was going to be oppressively strong with this card, but Bandai may have tested and decided that it would be. Fair enough.

That's the final card on the ban list. Now let's get to the erratas. These are very spicy, and are going to upset a few people, but I feel they are mostly needed.

Goku Black from set 2 hasn't been played for yonks, and players were getting excited to attempt to bring it back for set 10! Alas, Bandai read our posts and decklists and saw that this leader breaks the Zen-Oh unison card (seems like Zen-Oh is causing all the issues!) by allowing you to keep an extra energy at the end of your turn. Bandai has changed the text so that it now reads:

This means you can now only ramp with either Black or Zen-Oh not both. It's understandable that they made this change. Older cards sometimes go forgotton and break new archetypes. This was one of those cases.

This card needed to get hit. I'm not sure I agree with how they decided to nerf it, but anything is better than nothing. Let me start off by saying I think multi colour leaders are in that "mistakes" catagory I spoke about earlier. They're just too strong. I commend Bandai for testing the waters, but I think this is where they should stop. The card now reads:

[Activate : Main/Battle][Once per turn]If it’s your turn,your life is at 5 or less, and you choose 1 card under this card and place it in your Drop Area : Choose one—

Which means you can only use your unison skills on your turn. That really hampers the defensive ability of this deck, as being able to buff your leader 10k for the turn on defense, was one of it's best perks. I think they could have just changed the life requirement to 3 rather than 5, but I am glad that they did this, the deck was just "goodcards.dek", and it was extremely boring. Hats off.

Booyah, this is what I really wanted. If I could only pick one of these erratas, this would be it. This card was just dumb, the scry ability was excellent, but I just think this blue green piccolo leader was too much, and shouldn't have existed. Bandai changed the skill to read:

[Auto][Once per turn] At the beginning of your turn, look at the top card of your deck andplace it on the top or bottom of your deck.

This means that you no longer get to draw after you scry. That means this leader doesn't draw, ever. I'm so happy about that. The deck is pretty much dead in the water, as it should be. Die in the dirt you filthy thing.

As you can probably tell, I've been decimated by this deck. Not only that though, a deck that has almost zero interaction with your opponent is just boring so I'm glad we have relief from it.

Our first unison errata and we can't even use them yet! Jokes aside this makes some sense. The card used to allow you to take a life and add a card to life, which sounds all well and good until you pair it with a card such as the Cheelai & Lemo wish leader, which doesn't allow you to take life with your non leader card skills. That pairing meant you could increase your life count, breaking this card before it even came out. The new text stops that:

[+1][Activate : Main]You may add 1 card in your life to your hand.If you do, choose 1 card from your hand and place it in your life.

You can no longer do that. Smart move by Bandai. I think a life gain mechanic is an inevitable eventuality, but they want it to be on their terms, and hopefully in a Namekian Archetype (please Bandai please!).

This one is straight out of left field, but again I understand why they did it. It's common for cards to be erratad in upcoming sets as developers tend to keep testing once the printing process has started. This card was able to bring out a bigger card even if you removed it yourself. Bandai has put a stop to that by making this change:

[Auto] If this card is removed from a Battle Area by an opponent’sskill, choose up to 1 {SSB Son Goku, Hope for Victory} in your hand and place it in your energy.

Makes sense. Nothing more to say about this really.

All in all I'm happy with the list and the changes Bandai has made. I really commend how they pay attention to us, the players, and try to make a game that we will all enjoy.

That is all! We'll be back next week with more reveals (I hope!)

How to handle Janemba - A Towa Player's Guide

THE CHAMP IS HERE! - An interview with Christopher Cheong.

The Saibamen - How it all began.