With a week until the draft box releases to the wild (assuming corona doesnt get it's grubby hands on another thing we're looking forward to), the final reveal of cards is complete. The DARs look amazing, both in card design and art! Let's cut to the chase.

Those of us that follow the story of DBS know that there are ⑫ universes, each of which have a parallel universe. If you add the number of each parallel universe together, they always add up to ⑬. Bandai has really run with this for these cards, pairing up the parallel universes nicely. Let's start from the top. 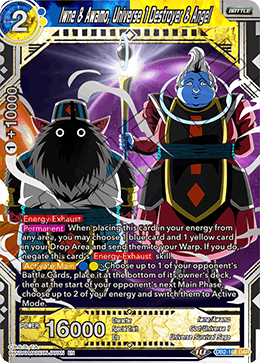 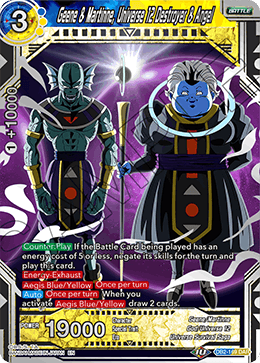 As you can see, they fit together beautifly, and have the same colour combinations. I think this is an amazing touch by Bandai, and shows that they really know their stuff.

Both Universe 1 and Universe 12 were two of the four exempt from the Tournament of Power as their universes were up to scratch (above 7) on Zen-Oh's scale, so we don't really have that many cards from them.

Universe 1s offering is a new kind of energy exhaust ignoring card, of which there is one for each colour combination on offer in this draft box. With these new cards, you may warp 1 of each of the respective colour cards from your drop, then negate the cards energy exhaust. Very strong indeed. The card can also be played for 2, and then activated for another 2 to get rid of a battle card, and also untap 2 at the start of your opponents turn, making the skill retroactivly free. This skill can be used multiple times per turn.

Universe 12 has one of the best DARs in my opinion. a 3 cost counter play that negates a 5 drop or less' skills, and also plays itself. You can then use aegis to untap on your opponent's turn, and draw 2 cards. Pretty strong, especially if you drop a multi with aegis. 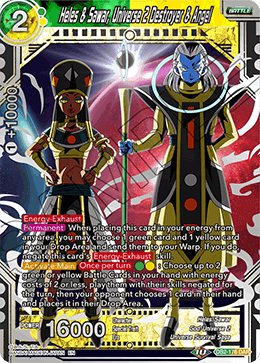 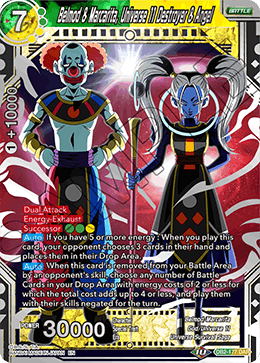 Man these cards are looking sexy as hell!

Universe 2 is Green/Yellow's Energy exhaust negater, it also allows you to tap 2 to play 2 cards from hand if you decide to cast it. It also makes your opponent drop a card. I think this is a better card to actually play than the Universe 1 equivelent, however, the real value in these cards is obviously when they're used as energy.

Universe 11 is an amazing card, it fits so nicely into any successor deck. It pairs incredibly with the Cell Xeno SCR, making your opponent discard 3 on turn 5, then used as cost for Cell to discard another 3. It also has dual attack (to push them to 4 life) and an auto that allows you to play low cost cards from drop if your opponent removes it, but lets be real, this is going straight in the drop to kill your opponent's hopes and dreams. 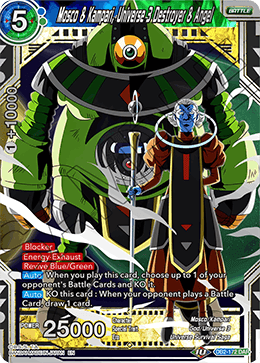 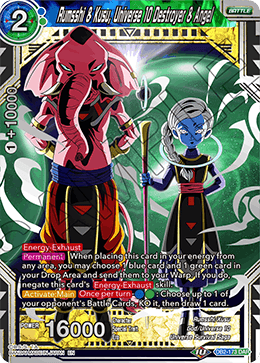 This time, the lower Universe isn't the energy slave. I've written about both these cards before as they were the first revealed, so I'll copy my thoughts from that post.

Universe 3's card is expensive, but it does have a very strong effect. When you play the card it KOs an opponents battle card of choice. It's a blocker that also has revive, so it can block an attack and if they KO it, you can play it again to KO another card. That's not the good part though. You can use this to block a small attack, then when they play a battle card, you can pop it yourself to play it again and KO another card. Great in ramp!

Universe 10's card is the Blue/Green energy card, and it makes U/G ramp even more threatening by providing a second card multi that can come into energy untapped. This time by warping 2 cards from drop. A fine price for such an advantage. You can play it and tap 2 to ko an opponent's card and draw. 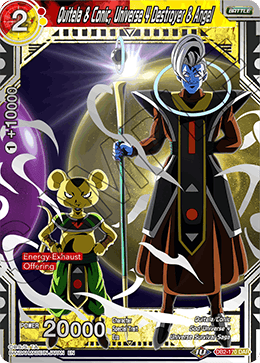 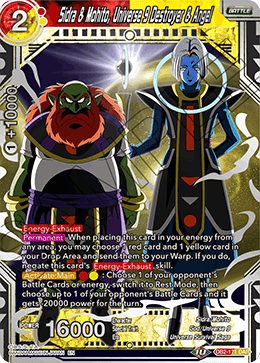 Universe 9 has my knickers in a bunch. It really peeves me off that this card isn't Blue/Yellow so it would synergise well with the doggos! Oh well, I guess they thought that would be too strong. It's skill is pretty good in R/Y though, you may tap 2 if you play it to neg an opponent's card by 20k and also swith one of your opponent's battle cards or energy to rest. It's important to mention that this skill isn't once per turn, so it could prove crazy strong in the right circumstances. 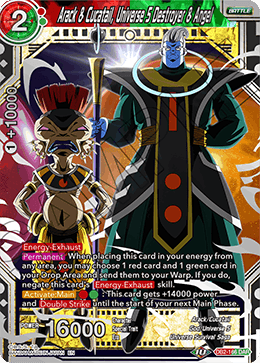 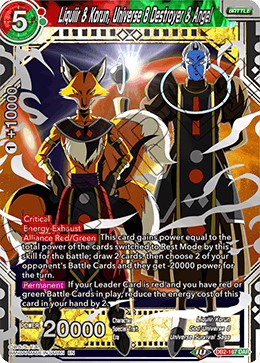 Universes 5 & 8 are the other two universes that didn't compete, so again we don't have much from them.

Universe 5's card is the energy slave, but this card has a more offensive skill than the rest of them. You can tap 2 to make it a 30k double strike until the start of your next turn (protecting it during your opponent's). The skill isn't once per turn, but two energy for a 14k buff is not really worth it unless your desperate.

Universe 8's card is a powerhouse. Coming in for 3 energy (which means it's susceptible to most counter plays)if the conditions are met, it is a 20k critical that uses the mostly forgotten Alliance skill. When you activate alliance, it draws you two cards, then also allows you to neg two battle cards 20k. Super strong in Broly Surge, like that deck needed more help! 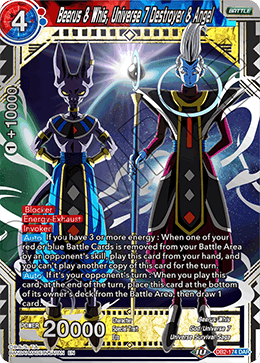 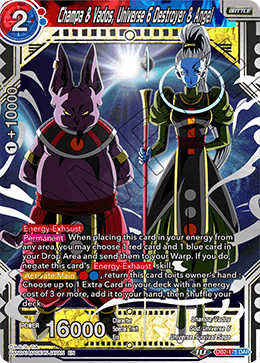 The boys are back in town! Love these guys. Beerus reminds me of me in highschool, and Champa is like a reflection of me now... how time flies. Now I have to point out, that these cards fit together backwards compared to the others as you can see. Universe 7 on the left and Universe 6 on the right. Don't ask me why, maybe it was a mistake? Maybe it's some nod to the source material that I'm missing? Let me know if it is.

The Universe 6 card is an energy slave. It ironically synergises well with Universe 7 Surge, in that it can search your extra cards, namely your Catastrophic Blow!

Universe 7's card is also support for that deck. It's an Invoker that comes out for free when your opponent removes a red/blue card from your battle area with a skill. Generally that will happen on your opponent's turn when they remove your invoker to play something big without having to worry about Royal Condemnation. Now U7 has an answer to this. If it is played on your opponent's turn, it leaves immediately when they pass and you draw 1 card. Kinda a stop gap to delay your opponent's big plays for a turn.

That is the last of the card reveals! We will be back with a case opening on Friday the 27th!