Bandai just keep the good stuff coming. We are continuing on from our first article to discuss some more exciting Draft Box 2 cards.

TOP is tops in my book. Which leaves me keen to review these little nuggets of goodness.

The Maidens: 6 new maidens cards this time around. There are several common elements here:

- KO an opponents battle card on play or when removed

- Play a card with 1 less energy cost than the card being removed from the battle area via an opponents' skill or KO'd.

A couple of the cards, one good and one not so;

Kakunsa, Beastly Maiden - a Counter:Attack which costs only GG on your opponents turn. When played - KO an opponents battle card. This might be a decent option for the traditional Maiden's engine (where all 3 are needed in play) and negates in draft can be hard to come by.

Rozie, Maidens Scorn - A 2 cost 10k combo that KOs one of your opponents battle cards that costs 3 or less. Very ordinary.

The maidens do a great job of clearing the opponents board and cycling from drop. The downside - they are damn expensive to get out. 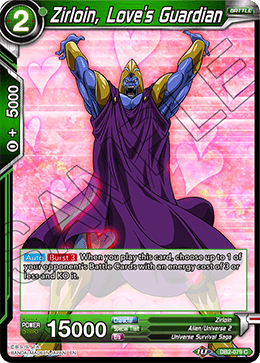 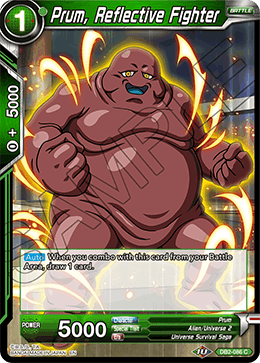 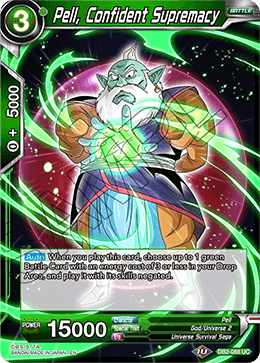 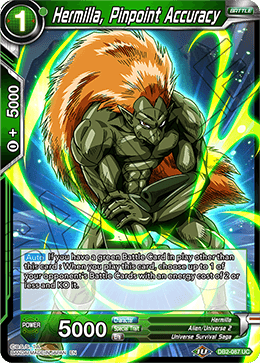 Straight off the bat - my favorite card here is Zirloin, Maiden Supporter. This card looks hilariously amazing. He costs GG3, but plays a 4 drop green card (doesn't have to be U2) from hand when he arrives and another from drop when he leaves (with skills negated for the rest of turn. He also KOs himself to stop all of your opponents battle card attacks for the rest of the turn. ....if only he was a cheap date.

The other 2 cards that caught my attention are both my boy Zarbuto. Zarbuto, Heroic Stance is an archetype that will be familiar to all. Take a life on attack to give him +10k and DS. Inside and outside of draft this card will see play.

Zarbuto, Maiden Avenger - Revenge blocker that costs 4. But can be brought out by his brother in dress; Zirloin. Setting up a nice defensive wall. Outside of draft - this guy won't make an appearance. Inside? ..Could be fun.

The remainder of the Knights support are nothing to write home about.

A little something Extra: Green Extras. None specifically tied to Maidens.

Heart Arrow of Love - give your leader + 10k and KO 2 of your opponents battle cards that cost 3 or less - I actually like this card. It does a lot for one G energy.

Pretty Black Hole - Maidens cost a lot and the majority have effects when leaving board. This card negates an attack then a battle cards skills before sending it to drop. Maybe if you had some overrealm happening this would be a viable way of clearing board. It also lets you draw a card. As it stands, I am indifferent to this card.

Big Amour - So much of todays Meta involves 5+ Battle cards. Frieza/Cooler, Successor and even the Bigger Buu cards. this stops any of these cards from swinging. This card will see use outside and inside draft.

Is it finally time for Ganos to soar like an Eagle? Lets see... 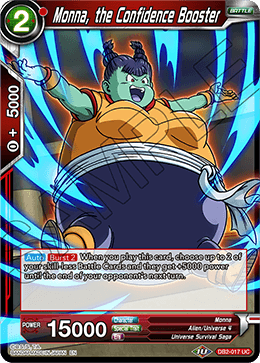 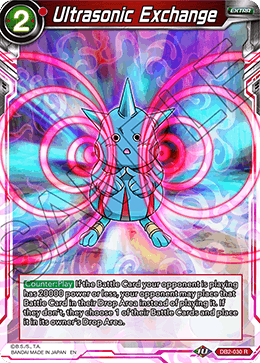 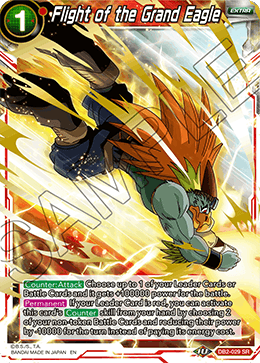 Cards worth talking about:

Ultrasonic Exchange: It's like Denial of Hope, if Denial of hope was called "Hey - here's some hope". Might see some play in Draft. Won't make it out

Flight of the Grand Eagle: Can be played by negging 2 of your battle cards by 10k. No energy needed, no need to take a life and give your leader +100k during battle. This card is great and will see play inside and outside draft.

Sadly, our friend Ganos didn't quite make it off the ground (again). The extra card though - is amazing!

I'm excited to see more of U5. For now we just have Ogma, Compassionate Supremacy. A free 10k blocker. Not bad for Draft. Let's see what future reveals bring. 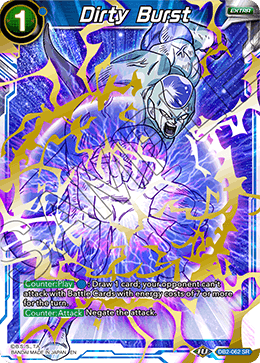 Universe 6 has seen a lot of love over the last few sets. DB2 is no different. We have a host of blue cards that fit into both the 'Alien' and 'Universe 6' Special Traits.

Energetic Energy Kefla - Getting this out for 3 energy is huge (if you can swing it). The Activate:Main of drawing 2 then re-standing 2 energy at the start of your opponents main phase is very powerful. I can imagine this seeing play in and out of draft.

Dr. Rota, Unknown Potential - This is cool, a 1 drop blocker that restands a blue on energy when KO'd. A very different card.

Energetic Outburst Kale - 2 drop 15k that restands an energy at the start of your opponents main phase. Not bad.

Dirty Burst - Done dirt cheap. This is a cool extra card which allows you to adapt to the situation. This card will be very useful both in and outside draft.

The rest of the U6 offerings aren't anything groundbreaking, IMO. 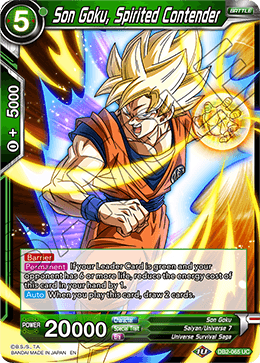 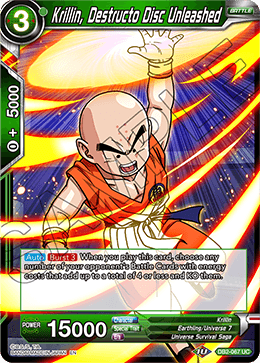 Roshis and Gokus and Androids. Oh my!

Not to forget Krillin, Destructo Disc Unleashed. Not the best card. I feel like every release contains a card picturing old Krill dog with a disc. Maybe one day we will see a good one?

One card that caught my eye is Son Goku, Evening the Odds. This will see some use in draft. It's just a pity it's not activate battle. 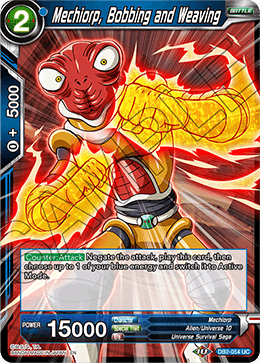 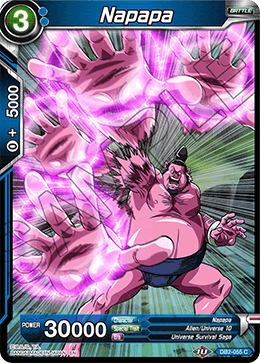 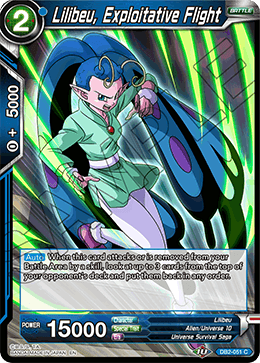 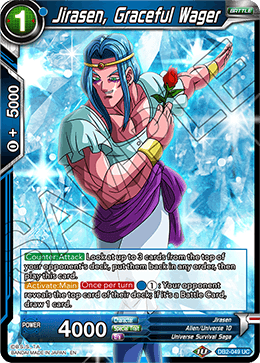 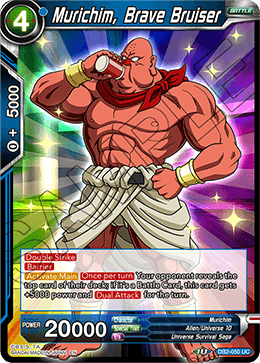 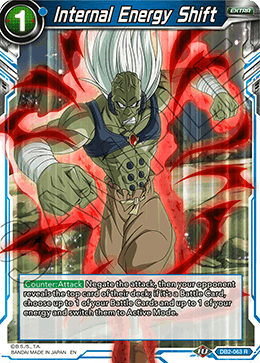 Okay. Universe 10 has some fun mechanics. Let's look at the standouts:

The core mechanic being to look at the top 3 cards of your opponents deck and replace them in any order.

Having scryed your opponents draw, you have the knowledge to utilize your battle cards abilities to the fullest. Some of the cards which make the most of this:

Murichim, Brave Bruiser. Right, 25k double strike, dual attack with Barrier. 4 energy to play, but in draft that is not usually an issue.

Zium, Lucky Air Raid. With an activate:main and an activate:battle this card is putting a lot of work in. Main: puts a battle card from your opponents top deck to the bottom. Battle: restand 2 blue energy.

It's just a shame he doesn't have barrier. This card will be targeted and removed very quickly

Internal Energy Shift. I really like this card. Negate an attack, re- stand an energy and a battle card. Effectively for free.

I am keen to get hands on with this.

Dyspo aka the rabbit guy is back. This time around we have 2 iterations. one blue and one green.

Dyspo, Sonic Subversion - This is different. I like the idea of having him in the battle area and acting as a deterrent. Unfortunately, the fact that they actually get to play the card AND that barrier will block it makes the card a but meh. I feel like 2 energy is a bit much for what this is doing. Unlikely we will see this outside of draft.

Hasty Dispatch Dyspo - I like this simply for the fact that you are playing cards from drop without paying energy. Also: this is another green option for successor U11.

Universe 12s guardian god is here and he is.... underwhelming. Inside or outside draft I don't see this fella getting much use at all.

Great Priest, Herald of Deliverance. This card has so many applications. Being able to return any of those lovely auto on play cards to your hand for future opponent abuse is quality. You also get this guy for 1 energy. The only downside being that you need at least 4 energy to play him.

I think this guy will see play in and out of draft. I plan to incorporate him into my Beerus, God of Destruction Returns

That's it! thanks for taking the time to read this article. I hope you enjoyed it. Please feel to drop us a line with any feedback.