I'm going to have that song in my head all day now...

We knew Trunks was going to be great! Support for the awesome leader we previewed here has been revealed and it's awesome! Let's take a look at that and more from today's Blue card reveal.

So here it is, the Trunks (and Chronoa Unison) support. Each of these cards does something when revealed from your life. So when you would add them to your hand (on your opponent's turn), you may do something else instead.

SSB Vegeta, Blaze of Passion and SSB Son Goku, Hope for Victory are the same card exactly. When you take them from life you may add them to energy in rest mode and draw a card. At the end of your next turn, if the card is still there, you place it in the drop area.

Bulma, Master Scientist is different to the other two. When you reveal it from life, you can play it. She then has an on play auto that lets you search the top 5 cards of your deck for a Vegeta, Goku or Trunks to add to your hand.

In each case you are getting an extra resource when these get hit from your life.

With the Chronoa Unison card, you want to be putting these guys in your life whenever you can and grabbing out your other pieces.

This card is really cool. I feel like it could really be a goer witht the right set up. It has the Unique keyword, which means you can only have one in play at a time. The permanent allows you to play it for two if you have a Blue Unison card in play, then it can sit on the field and generate advantage as long as you keep it alive as it draws a card at the end of your opponent's turn. Keeping it alive is likely a big ask though,

The fun part of this card is the Activate: Battle that gives the card +10k and Triple Strike for two blue energy. A very nice buff that's for sure! This could be a good way to utilise the extra energy you get from Goku and Vegeta before it heads to the drop area.

Now, more Zamasu support incoming. Both of these cards revolve around ramp for the turn, which seems to be a theme in blue this set. I feel like Bandai have learned there lesson about how oppressive ramp can be and they're trying something differet, which is great.

Goku Black, Future Decimator is an awesome way of ramping up for a big boss card on the same turn. He can be activated from hand to place him in your energy. Once he's there you have him for the turn, and can't play non Zamasu/Goku Black cards that turn. At the end of turn if he's still there you sack him.

Zamasu, Cosmic Traitor is a similar ramp card, although I prefer the Goku Black, there's a method behind the interesting wording of this card. This guy comes out for one, then ramps you from the top of your deck. he difference between this guy and the Goku Black is that you lose an energy regardless of whether the one you put there is still there.

Now all this talk about whether or not your energy is the same at the end of the turn is strange, until you see these next cards (or play the old Goku Black leader).

Fuzed Zamasu, Advocate for Evil and Vegito, Infinite Radiance are two cards that are very different to anything we've seen before. The first glaring difference to other Union Potara cards is that they can use cards in energy as potara targets. The second is that the potara is free from energy cost completely.

Zamasu requires 3 or more energy for his permanent to be in effect. He ties in perfectly with the cards above. On turn 1, you can place the Goku Black in your energy, then use him to play Zamasu and ramp to 3. Then you can use the Zamasu on the field and the Black in your energy to fuse into this guy, giving you a 24k Indestructable body on turn 1. Not bad at all. You then still have 2 energy open for whatever else you want to do.

Vegito is less exciting, however has the same concept. He needs 4 energy in order to use your cards in energy for fusion. What you want to be doing is utilising the Goku and Vegeta that we spoke about above to play him for free once you've already used them as energy for something else. He's protected from threats by Deflect and Barrier, so it's almost a guaranteed 25k.

Next up we have Respectful Master Gowasu, who is a top 7 Zamasu searcher. Nothing much to see here.

Now we have two new super combos to add to the mix.

The first of which might upset some people. Son Gohan, Accelerated Slam is finally another future Gohan card, and it's just a boring generic supercombo. At least it's a sign that he's in this set, and maybe we'll get a nice SR or something, you never know!

Zen-Oh, Edge of Space is where it's at with this reveal. This guy is the new Unyielding Spirit Trunks!! He can be played for 1 energy to draw a card, and then also be combod with to untap (replace) an energy. Not a blue energy, any energy! The caveat to this compared to the Beerus SC or Unyielding is that you need to be at 5 life to use that auto. Something tells me that won't stop people!

I'm loving that we're getting Saiyan Cabba's for every colour now. Vegeta, Savior of the Future is a great option to replace Pan for self awakening in blue. Attack, take a life, +10k Double Strike. Not much more to be said. 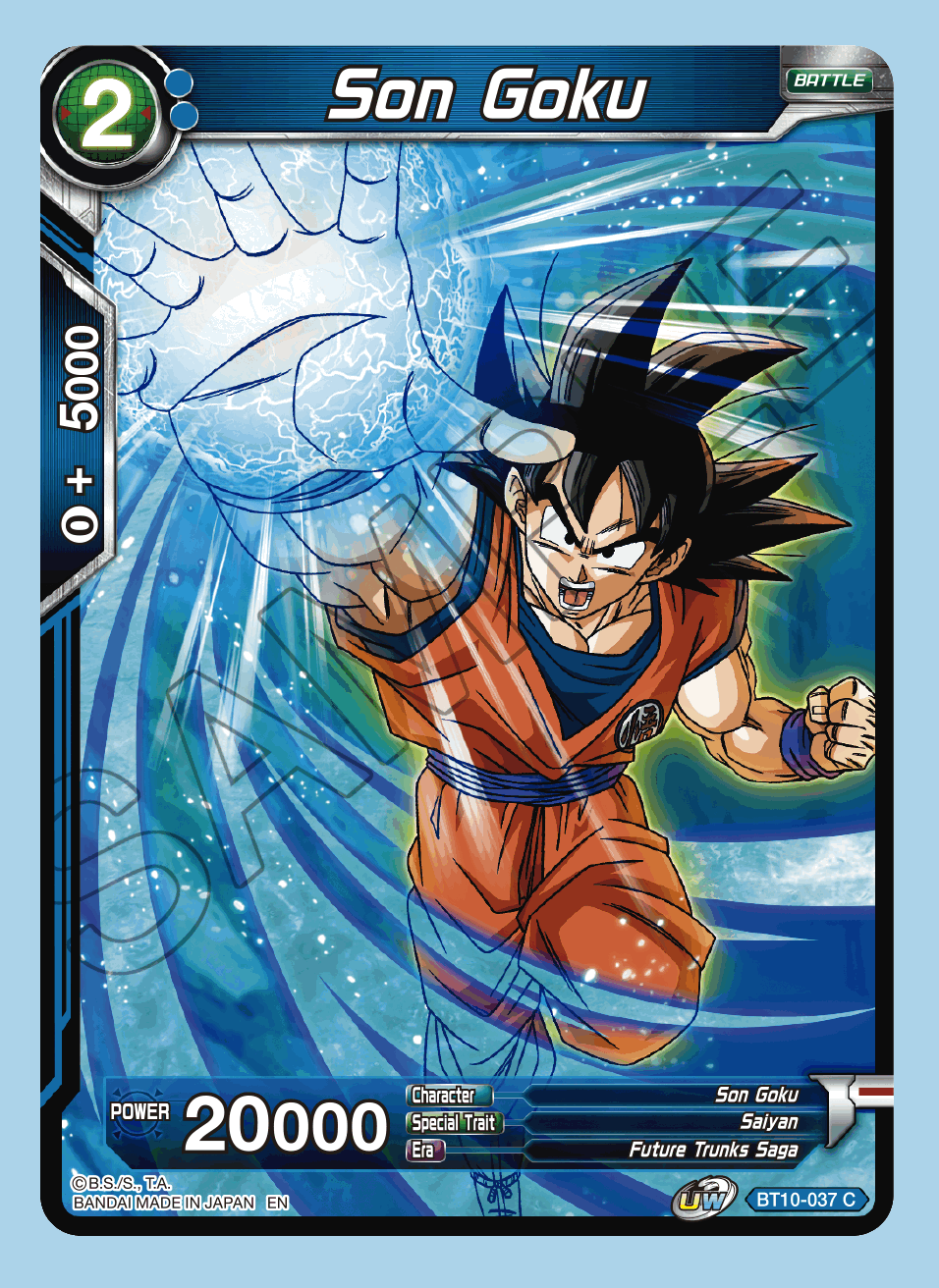 Three new extra cards were revealed today. The first two of them are 2 drops.

God-Slicing Black Kamehameha (what a sick name) is a counter play that can only be used if you have a blue unison card in play. It draws you one card, then bottom decks the card coming into play if it has a cost of 4 or less. Finally a Preemtive Strike for Blue! This card can also be used for 0 energy if you discard 2 cards! That's a heavy cost, but considering you also draw a card on activation, it could be an awesome surprise attack!

Absolute Confidence is an Activate:Main/Battle that allows you to choose one of two effects. The first shoots a 3 drop back to your opponent's hand while also replacing itself. Great to use during battle. The second removes a marker from your opponent's Unison Card - the first card we've seen that does this. Seems like a decent card.

The final card from today's reveal is arguably the most exciting. Tragedy Overground is a 9(!) cost Field card that cannot be removed by your opponent's battle card skills. When you activate it, it put's all your opponent's battle cards in energy, ignoring barrier! Then, once it's on the field, your opponent can't play battle cards with an energy cost of 4 or more, or they're just put straight in their energy. As someone who has spent their fair share of time with the set 7 Zamasu leader, this card is game winning. You could use some of the new ramp to get to 9, play this card and just win. I'm excited!

That's it for today. I hope you enjoyed my insights! Let me leave you with this absolute banger that helped us see out the 90s in style.