How exciting! Not only did we get to see the DB4 Black cards today, but we also got a bonus of the multicolour cards as well!

First of all, skill less support is on the menu, which seems to be a theme of this Draft Box. Let's get to it!

These three cards (Goku and Eighter in particular) compliment the skill less option for the draft format extremely well. Providing extra removal, Son Goku, Striking True is a beater you can keep on board, or immediately combo off when Bonds of Friendship Android 8 is on the board to remove two threats. I don't think the Goku is strong enough to see play in constructed (much at least) though.

Dende is just a cantrip that also has a secondary function of supporting the skill less archetype. Love it!

Over realm support is rife with this reveal. We have free removal in the form of Trunks, Dimension Sniper, which is something I think is extremely playable.

Mira, Assault from the Skies provides a double striker, with an untap for defense on your opponents turn. Over realm 7 means it most likely wont see play in Towa, although you can union into it in a pinch.

The over realm reprints are just the standard searchers and the free double strike Bardock, which in the draft format, could prove the difference between a W or L.

I don't think Umbral Invitation Towa is the best choice, as Dark Over Realm could be hard to pull off.

More interaction with your drop is always welcome, and being able to do it with a card that is already in your drop is excellent. This will work exceptionally well against Janemba. Unlike Trunks, Power Overseeing Time, it doesn't matter if Janemba Mills this card. Downside is that it can only retrieve black cards with an energy cost of 7 or less, so it's more geared towards mono black decks. 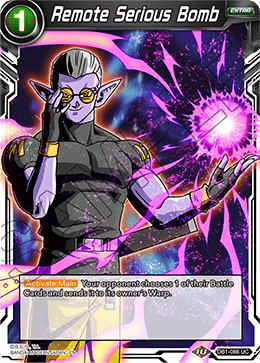 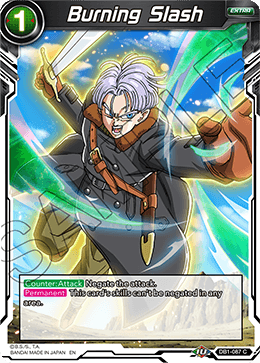 Two new black extra cards will be gracing us with their presence. Both of them could be game changers. Remote Serious Bomb can be great against decks that pull out one big bomb card leaving the opponent only one target to choose from, assuming it doesn't have barrier.

The last two black cards are reprints. Kami is obviously a good shout for draft given how wide boards can get. However we've seen a lot of removal revealed in this box, so I don't know how useful it will be. Shun Shun - take it or leave it.

Okay, that's the black cards done. Interesting to note that there aren't any Black SRs.

Rainbow Time! With this draft box we will finally have every colour combination available to us (with the exception of black mixes). These cards will help with draft immensely if you manage to snag them.

Hercule and Buu are here to provide us with the fabled Red/Blue mix we have been waiting for. This card is good before you even consider it's skills. Having red/blue energy in things like Veku Ramp and Pan Midrange could make those decks even better.

This card is a best of both worlds type deal. Arrival for one blue energy, neg your opponent's battle card by 10k, draw a card, then flute up to one of your cards at the end of the turn. Value is an understatement.

This card is very interesting. More support for the R/G fans out there! I think this is one of the best arrival cards we've seen since SSB Gogeta, Resonant Explosion. It gives you more removal, as well as a double striker (like the aforementioned Gogeta), although you need to have another battle card to give it to. Champa loves providing DS to other cards.

Red/Yellow this time, and I'm really liking the art on these multicolour cards so far. The King and his son are our first of this colour combination, which is cool. They also act as a sort of "Shugesh Explosive" combo, which could be amazing in the right deck! Obviously only hitting 3 or less restricts it a bit, but these days 3 drop battle cards can be big hitters.

Ramp your opponent with Son Goku and Son Gohan, Saiyans of Earth. Interesting to say the least. Two energy to remove a 5 drop or less threat mid battle, with the caveat of it helping your opponent by ramping them. That could be useful in the new Zamasu, but this doesn't seem like it will fit.

Man I love that art! Such a great scene in the movie, and it has translated so well here. This card will help blue/yellow decks a lot. Arrivaling on your opponents turn when they go in with a double strike for game, only to have it taken away (like we've seen with Towa, Chaosbringer and Godstrike Beerus) could be devastating.

Yes! Just yes! The power couple. G/Y androids here we come. This card is excellent. Like the card above it can remove a keyword skill mid battle. This card however pays no mind to barrier since it doesn't choose the card. Excellent card, this will definitely see play in both formats.

That concludes our overview of the newly revealed Black and multicolour cards. Again interesting to note that there are no multicolour SRs either. We do know however that this set will have Campaign Rares, which will likely be multicolour also.

We have uploaded all these cards to our proxy cache under DB-1.