G-day Saiba-fans! Sorry for the delay in articles - I’ve been trying to think of the perfect knock knock joke that doesn’t end in “Buu-Who”, but it doesn’t exist.

Today I wanted to share a deck profile I’ve been having some fun with. I call it “red, blue, Buu eat you”. Now try saying that in your head without using Buu’s voice - it’s impossible.

I really wanted to use the babidi leader, but I also wanted to show my face at locals without being laughed at, so I decided to go with “Majin Buu, Ability Absorber”. This is the set 6 leader, designed for running the Buu engine that plays from energy. This build doesn’t focus on that engine, instead it focuses on one of my favourite cards, “Grand Evil Absorption Majin Buu” - we will get into the specifics of that card later. 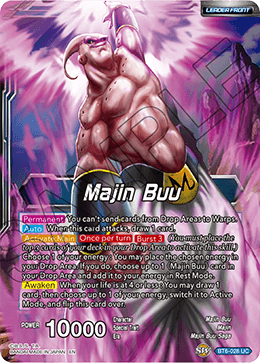 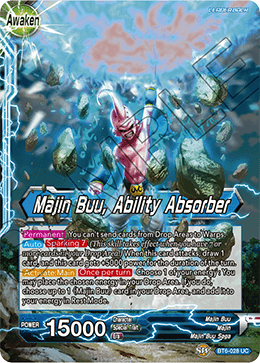 More on the leader card. It is generically good. It draws on attack, and it untaps 1 energy and draws 1 on awaken. On the front side it draws, as well as buffs itself - that’s pretty good in any meta. One of my favourite things about this leader (and the reason I didn’t go with any of the other Buu leaders) is the activate main. It’s a cool gimmick, that fluctuates from being amazing to holding almost no value. The skill bursts 3 and lets you swap any of your energy with a majin buu from your drop. This is great because I play red and blue colours, and this skill let’s me either start my turn with a blue energy and switch it with a red (or visa versa) or if you’re lucky, swapping a mono colour with a dual colour Buu in your drop; do this turn 1 and it feels almost better than winning the game! The down side is sometimes you burst good cards, with no targets to swap. I suggest you are conservative with this skill.

Now for the deck list. I started this deck with 1 card in mind, “Innocence Canon Majin Buu”. This is the 2 drop counter attack from the anniversary box, designed to support babidi or majin buu leaders. It negates the attack, then stays on the field as a red evolve target for buu.

I play 4 multi colour cards- these are “Hercule and Majin Buu, Best Friends Forever”. Fun fact, not including these cards reduces the deck cost to spare change you may have in your glove box. Although expensive, this card is probably worth every penny. It is an “arrival” card that come out for 1 blue energy. The auto is the gift that keeps giving - draw 1, neg your opponent by 10k, and return a card to your hand at the end of your turn. I play 10 x 1 drops that draw on play, these are all great targets to return to your hand to keep safe and reuse. The main reason to play these bff’s is it becomes a 1 energy evolve target, which is the cheapest way to evolve Buu in the game. Despite what my wife says, trust me an early arrival is a good thing.

I play 4 x “Hercule, Buu's Assistant”. This is a 1 drop searcher. You get to look at the top 7 cards for a buu - finding a decent match here is probably easier than tinder.

I play 2 “Android 17, Rebel Reinforcements”. This is an amazing counter. For 2 energy it negates the attack, plays a 15k battle card and plays a 1 drop red card from your drop. Play Hercule or Frieza and you have just payed 2 energy to negate an attack, draw a card and play 2 battle cards - that’s more value than the original Maccas family box.

The last 1 drop in my list is “Energy Boosted Majin Buu”. Again it’s a draw 1 on play. I mostly play it for the blue energy and it’s a target for the leader energy swap skill.

I play 2 “Surprise Attack Majin Buu” cards. This isn’t great value however for 3 energy it guarantees you an evolve target while searching for your Awakening Evil. I’d only use this path if I was having no luck finding the buu’s I needed.

I play 4 blue negates, “Buu Make You Cookie”. It isn’t the best blue negate, but it’s only playable with a Buu leader, so why not have a little fun with it. It negates an attack, and let’s you aborb an opponents 3 drop. I don’t often use it due to the card drop requirement, but it’s pretty satisfying turning your opponent into baked goods. 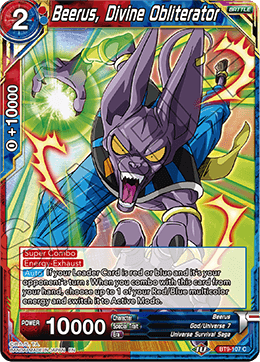 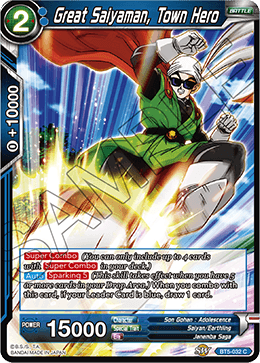 I play 4 super combos - 2 sparking (which work great with the leaders burst), and 2 beerus multi colour; these are great for arrival and untapping a multi colour energy. You can substitute any of these super combos for more of one type. I like a combination for diversity. 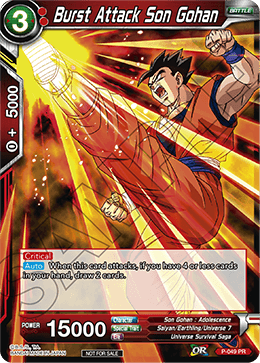 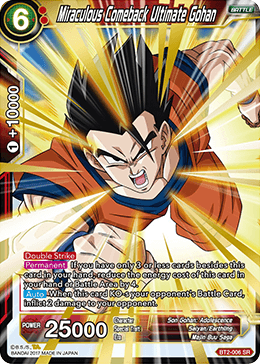 I play 6 Gohan adolescence cards. 4 “Miraculous Comeback Ultimate Gohan” and 2 “Burst Attack Son Gohan”. Both of these cards are meant to be absorbed rather than hard casted, however they are both good cards in their own right. Miraculous Comeback is a 25k double striker that can come out for 2 energy if you have 3 cards in hand. There’s a time and a place where this may actually be a great option for you. Burst Attack is a 15k crit and lets you draw 2 cards when you have 4 cards in hand.

The core of the deck is “Awakening Evil Majin Buu”- this is a set 2 card, and it has seen more action than my ex girlfriend. For 2 energy the evolve targets are either the bff’s or innocent canon, then you can place a card under this pile, and absorb a buu that is 25k or more.

The absorb targets are where the excitement begins. The main target is “Grand Evil Absorption Majin Buu”. Place a gohan under this buu and it inherents it’s skills. My favourite combo is “Miraculous Comeback Ultimate Gohan” under grand evil buu. It gives you dual attack and lets you attack active mode cards - the best part is when you KO a battle card, your opponents takes 2 life. This card helps you clear boards while doing leader damage, and at 30k it’s no easy attack to out-combo. The other option is “Burst Attack Son Gohan”. Ultimately this turns your buu into a dual attack crit, and if you have less than 4 cards in hand, you can draw 2 (for each attack!). Both options are great in different circumstances.

The finisher, is “The Ultimate Evil Majin Buu”. For 1 energy you can evolve your grand evil buu (after it has attacked twice), switch it to active mode and now you have a 60k triple strike aimed at your opponent. From start to finish, that’s a potential 8 life points you can take with all these buu’s - not likely, but fun to think about.

A fun card I play is 2 x “Bring Back Buu”. This is a Hail Mary that should only be used in a tight situation. This is a 4 cost extra card that lets you play your grand evil buu from energy (and a gohan from drop) and unleash our favourite combo, again.

Try this deck out and I guarantee you will be leaving your locals with everyone cheering Buu - for one reason or another.

Here's some gameplay of the deck:

Australians, jump on The Midian Guard for all your DBS singles!l

The Spinach Files #1 - Cooler Than You