Taking locals with The Saibamen!

So I wanted to write a little blog post about my locals this week, where I took the plunge and made a deck including our namesake saibamen cards, and ended up going 4-0 and winning the tourney!

Let's start this off by mentioning that this deck isn't a 46 saibamen and 4 nappa type troll deal, it's more of a "use the saibamen to stall until the big boys come out" deck. Another thing to note is this is the first iteration of the deck, and it leaves a fair bit to be desired.

So let's do a deck profile before I take you through my matchups:

Set 7 Son Goku was my leader of choice - there are a couple of reasons for this: Firstly it's a fairly defensive leader with a once per turn negate built in, and the deck I was going for was extremely defensive. Secondly, the Burst 7 really helps out with getting the drop full for the Kaioken finisher (yes this is another Kaioken deck - sorry not sorry).

So Saibamen are obviously our mascots, that's why I decided I needed to build a deck around them. The next two selections are there for that reason.

2x Nappa, the Cultivator & 8x Saibaimen, Endless Explosions (I just want to point out here that our name, The Saibamen is the correctly spelled name from the English dub)

As soon as I saw these cards in the release of set 7, I was disappointed. "Why can't they do a little more?"

Still, being part of The Saibamen, I knew I had to try and make them work, at least in some form. You know what? They put in work!

1 drop blockers aren't bad in this format - I mean sure, it's a minus one either way, but if played with the Nappa you're fueling your drop, and it ends up being fairly irritating for your opponent when you have multiple blockers on board. Don't get me wrong - this will never be meta, but it's fun. Being able to pop off pesky 1 drop self awakeners when they attack if your opponent isn't paying attention (which happens fairly often, because no one plays these cards) is always fun too.

Universe 6 is probably the worst matchup for this deck, because it needs to stall, so Negotiator Krillin was a must in main for me. Plonking it on the field in your first two turns (and playing any you draw), mean your opponent really needs to think about their plays, knowing that at least one of their combo evolves is going to fail.

4x Trunks, Bridge to the Future

Excellent searcher in this deck considering it's mostly Saiyan based, and the downside of dropping a card becomes an upside because it fuels your wincon. Being able to grab the next card came in clutch a couple of times.

Obvious auto include in any green deck, this super combo is amazing. Deck filtering is pretty important in this deck, and because he's a Saiyan, he's searchable using the Trunks - amazing. 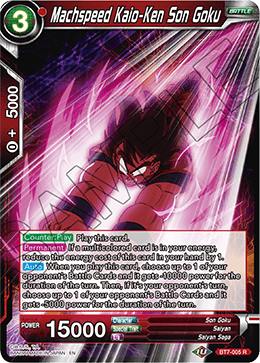 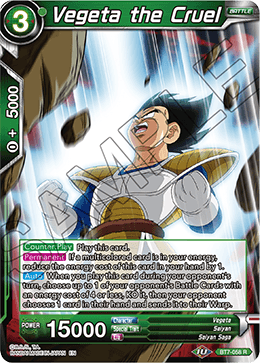 These are essential for staying alive until you can drop your bombs. I'd probably change the ratios a bit if I play this again. Machspeed is the only mono red card in the deck (more on this later), so I'd probably up that to 4.

I don't think I need to explain why this card is in here: Energy

This card is what allows for the off centre ratio of Green to Red cards. I was lucky enough to see this card on the regular, so pulling off arrival was a sinch. Worst case it's a 20k body on attack.

Arrival is just crazy value, especially when you get to utilize the Gohan Promo. SSB Gogeta won me a couple of games on his own. Fated on the other hand was less utilised, and I will probably take it out and replace it with a self awakener which I was lacking in main. He did the job when needed though.

This card needs no introduction. Stall and negate with leader until you have enough cards in drop, then play this for 5 and win. Having the Saibamen in the deck really made it much easier to stall out other decks. Surprisingly this one me less games than the next card.

This is such a good SCR. Burning your opponent for 2 on either players turn is crazy on it's own, but then combining that with the second auto, this card is a thing of beauty.

I won a few games by attacking with whatever I had on board when my opponent was at 3 life, comboing up a storm and arrivaling this card. Immediately they go from a place of relative security, to having to hope they have enough combo power from cards with over 2 energy to survive. In most cases, they didn't.

These are mostly self explanatory. Preemptive is just a "nice to see" card in some matchups. Shocking Death Ball is good to deal with BCs that The Saibamen can't clear off. Feet Kamehameha makes a simple leader swing into something your opponent may not want to take. It also helps greatly on defense.

I'll leave the side deck out, as it's based around what I know people play at my locals, so it most likely wouldn't be super relevant to everyone.

The Saibamen Deck - Click the image for full decklist

And that's it! A locals winning Saibamen deck!

I went 4-0, going up against R/G Broly, Starter Gogeta (wow, that only being able to counter once is brutal in this meta! Gogeta 7 also hurts), Golden Frieza Hand Destruction & Ramp.

Gogeta was the hardest matchup because if I don't manage to go off on turn 5, or go second, it's hard to come back from dropping my hand. I managed to get by against it by playing as many Saibamen as I could, and defending my life hard, meaning my hand was low, so the Gogeta didn't hurt too much.

I was disappointed that I didn't play against a U6 deck, but I did get a couple of test matches against it earlier in the day, and having the Krillin on board was hilarious!