Chris here with a new series I’ll be working on in the next few weeks! Each week I will be releasing a new mono list for people that want to try out some strong mono builds using each of the ISR's as well as some of my favourite leaders.

Firstly I will address the elephant in the room. Android 21.

Yes I know A21 completely ruins any mono build and I do not recommend using mono at events for the time being. However at locals or with your friends you should totally try some of these out. I have had a blast with them! 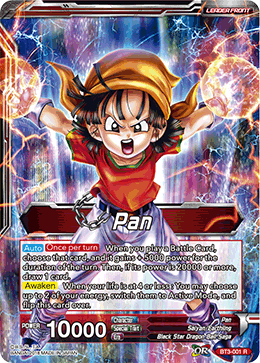 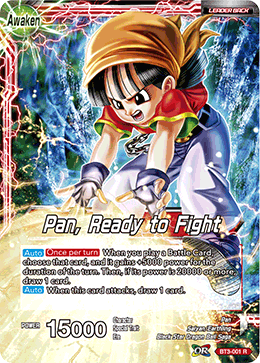 This leader is still my favourite red leader when I want to play a generic red build. Being able to draw from playing battle cards with 15k or more is a useful tool when you don’t want to be too aggressive.

The extra 5k to the first battle card you play is also a very handy thing as that potentially forces your opponent to use a card out of their hand to out combo your attack. 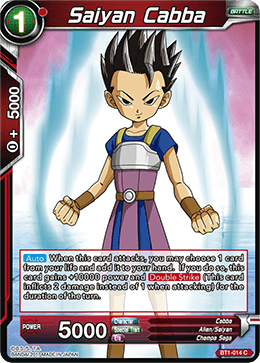 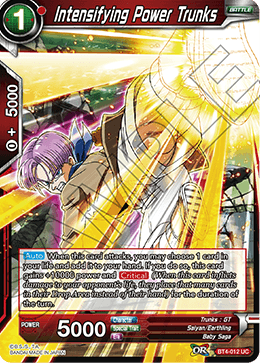 Saiyan Cabba and Intensifying Power Trunks (x3 of each)

These 2 both make it in the list with 3 of each. Cabba provides a good finisher tool and Trunks is also good for the potential double crit. Also a target for Chain Attack Trunks.

This card is almost a staple in Pan decks. Being able to draw 2 cards from both its effect and leader effect is a perfect turn 2 play. Not to mention a 20k swing. VALUE

This guy is still finding his way into this list for me. If you are going second and your opponent has a battle card you play him. This essentially gives you a free 20k body plus you draw a card.

Chain Attack is in here primarily to be used with Fearless Pan. Having 2 targets in the deck for him is very useful. Play Fearless Pan using his effect when you have a few bodies and your board becomes very deadly.

This card is great in this deck. It gives every red leader and battle card you have 5k and double strike on play. If you play this first in your turn it also gets 5k from your leader and you draw a card.

This is in here mainly for finishing. Your opponent should expect this but it is always a useful card when you want to play aggressively. Combo with this on Intensifying Trunks early too for extra pressure.

Super combo of choice. There are many you can choose from now so take your pick! Sparking combos are also a great choice as you will not be using overealm.

This deck has 16 extra cards. Chances are you will get to use this card to its maximum effect. Play this for 1 energy when you have 4 extra cards in the drop and you get to neg a card by 5k, negate the attack, vegeta gets 5k AND you draw a card if it was the first card you played in that turn. All for 1 energy guys.

You can choose to run 3 of these however I have found that even though Pan’s effect balances out the added cost of discarding a card, tapping 2 energy can be expensive in some circumstances. Still an amazing card when your opponents hand isn’t big and can really stall out the game if used correctly.

This card is amazing. Play it for 3 on your opponents turn for board clear as well as 5k to your leader. You will also draw a card. Not light on the wallet at this time so I understand if you don’t have access to these. In that case I recommend adding in more Toppo’s and counters.

Great counter play for when you want to break up your opponent’s strategy. Usually this buys you a turn early in the game.

Similar to Denial of Hope however for less energy. Another card to stall and board clear.

Still my favourite red counter. Neg 2 cards by 15k if you discard as well as counter the attack. This deck can afford it as you will be drawing many cards.

This is more of a situational counter. I only run 2 copies for when I am attacked by a card that I cannot negative the attack for. Generally this will halt the attack as you swing the combo power in your favour.

I love this card. Brand new, shiny and my goodness it is great in this deck. For 1 energy you can swing an attack by 25k just like that. I don’t really need to explain much more there. Its ACTIVATE BATTLE.

So the challenge is to have at least 3 copies of each ISR in my mono lists. Nappa is an easy include as its effect is super handy and has won me so many games in the past. Your opponent generally doesn’t expect auto damage to their life most of the time. You can turn 3 life into 2 and go for the win before your opponent can blink. Its SS3 Nappa guys. Nappa.

So there it is!

Generally you can play this both aggressively AND defensively by having such a great tool kit within the deck. Being able to counter and play cards on your opponents turn and draw cards from that is super strong.

I have had a blast coming up with lists for this mono/ISR challenge and I look forward to showing you the next one next week!

Again, feel free to mix it up a bit and add in your own spice as you see fit. I am sure there are even spicier ways to play this deck so I look forward to seeing what you guys come up with!

See some of you in 2 weeks at Australia’s first 2020 Regional in Adelaide!

~ Chris Trevenar AKA The Spice King

The Spice King #10 - Mono Challenge - Buu with a twist