I'm in shock... Bandai just whacked a bunch of Set 10 spoilers on their site! They're incredible, and they give us a taste of whats to come with the newest set! I'm franticly writing this while I make dinner, so forgive any mistakes!

Let's go through all the new leaders first! Oh my gawd a new Yamcha <3

Yamcha, Supersonic Striker, is another Red Yamcha leader. We haven't been shown the front side yet, but the awakened side is something to be excited about! When the card attacks, you get to do a top 2 search for a red card (pushing mono slightly) to add to your hand, then place the other card in the drop - deck filtering is excellent - then he gets +5k for the turn.

His second auto revolves around having a red unison card in play. What an auto it is. This leader has burn deck written all over it! Smash in that Yamcha SR from set 5, and Gohan SR from set 2 (among others) and you can burn them once extra during the game with your leader, potentially hitting for 3 life to end the game! Another card that I want to mention here is SS Gogeta, Acrobatic Warrior... Could Alliance come back (was it ever here?)?

The second leader of the reveal is Fuzed Zamasu, Divine Ruinbringer. This card is more generic than Yamcha, in that it doesn't seem to revolve around Unison. He has a draw one on attack - standard, but he also has an interesting Activate:Main. The skill allows you to either gain Dual Attack on the leader, or get rid of an opponent's battle card. The cost is sacking one of your energy, which could be too high. It may breathe new life into cards like Android 16, Mechanical Prowess however, and on the turn you go for game, you're not too bothered about sacking an energy. Time will tell if this deck will smack!

Now this card is interesting - I like it a lot. Ferocious Strike SS Son Goku has an strange auto for an awakened leader - Burst to draw. Now we've seen that a lot on front sides, but there must be more to this for it to be on the back.

Now this Activate skill is strong as hell, but it comes at a hefty cost. You can sack 2 life to the drop to wipe both your opponent's and your own battle area completely. During battle, or on your turn. That is crazy strong, but as I said, the price is high, so it's decently balanced I think.

Adult Gotenks coming in hot! This guy is a beast. SS Gotenks, Display of Mastery is an amazing leader, and we've only seen one side. He draws on attack - again, standard, but thats where the normalcies stop in their tracks. His second (of 3!) auto activates when your opponent uses an extra card. You get to draw a card, AND rest an opponent's battle card... Like what!? We've been asking for a way to counter extra cards for forever, and now we have it!! I'm so excited for this. He also has an auto that procs when you use Union-Fusion - which kinda puts him in a box. You get +5k and crit when you fuse, which is another amazing skill.

Let's be real, even if you had no intention of using union, this leader is still amazing. Let's just hope they didnt gimp his front side because of it. 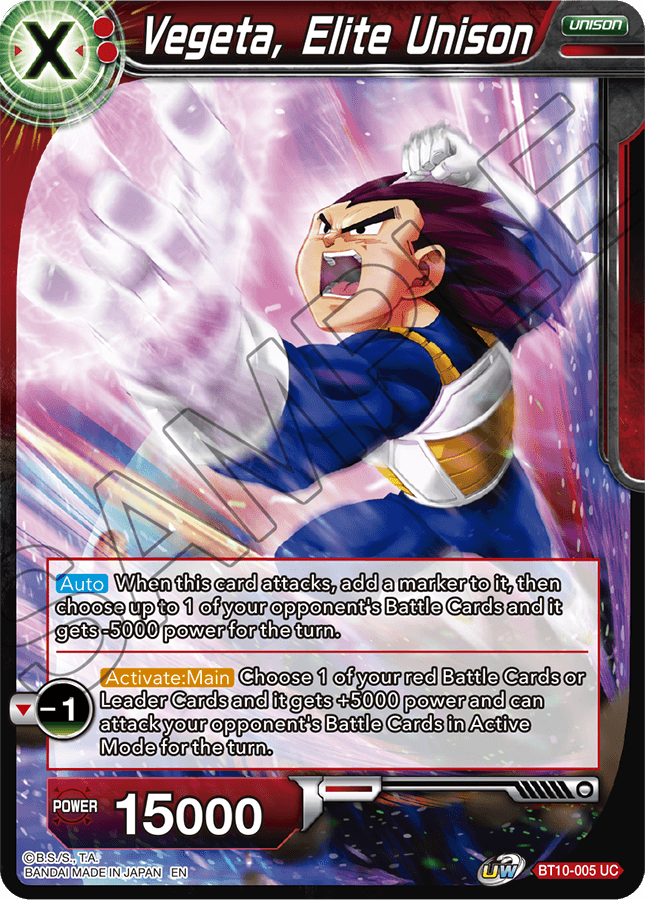 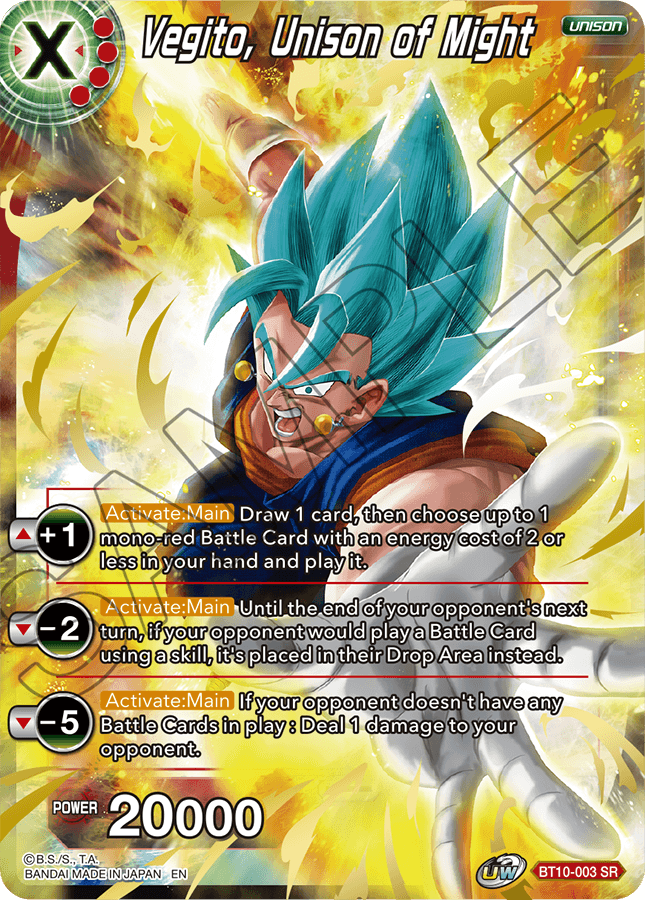 Vegeta, Elite Unison is a fairly basic card, it's 2 red energy, it adds a marker when you attack, and also negs an opponent's battle card by 5k. His only unison skill costs one counter. It buffs a red battle or leader card by 5, then allows it to attack active mode. Now you see this card works great with the Yamcha burn deck above, but all in all it isn't anything overly special.

Our first SR unison card is Vegito, Unison of Might. This card is expensive to get out, having a specified cost of 4, but there's a reason for that, a couple actually. The first is that he has very expensive (and useful) unison skills, so you will need the counters. The second is that he's a 20k base, unlike all the other Unison cards we've seen so far.

Vegito has a +1 skill that allows you to draw a card, then play a mono-red battle card with 2 or less for free, which is hella value. His second unison skill is -2, and it is also insanely good. This stops your opponent from playing any battle cards using skills on their next turn - potentially stopping their game ending threat. The third and final skill is a burn skill that allows you to deal one damage to your opponent if they have no battle cards in play. Now the problem is the cost is -5, which I think is too expensive for 1 damage, but we don't know how well these cards will perform yet, so who knows.

The one blue Unison card revealed today was Zen-Oh, Cosmic Unison. He's an SR, with 2 specified blue and 9000 power. He Has a +2 skill, which is the first of it's kind so far. When you activate the skill, if your leader is mono-blue, he allows you to ramp once during your turn for free, but the energy is sacked at the end of your turn. I think this is a lot of fun, giving you extra energy without being broken. His second skill is -5, and it performs similar to Zen-Oh, the Plain God in that it wipes both battle areas, but it doesn't touch the hand. Pretty good support me thinks!

Okay, so green has my pick of the bunch. It's the whole package. SR that has amazing art, it's cheap, and super playable. SS Bardock, Paternal Unison seems right at home in the current meta. He can slot right into Piccolo or Broly Surge with ease! 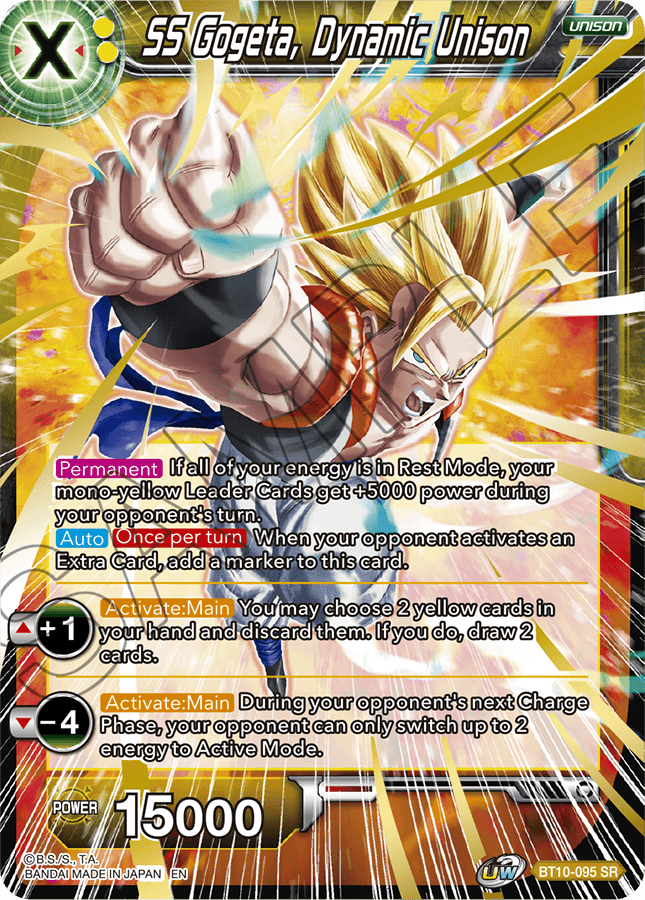 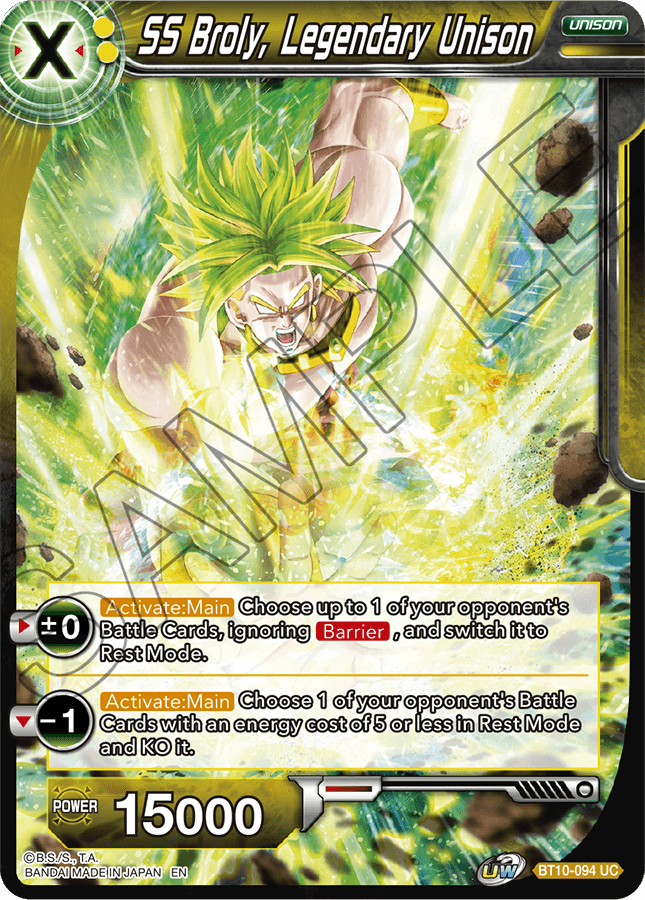 Gogeta is very interesting. He has a permanent that protects your mono-yellow leader card if all of your energy is in rest on your opponents turn... Imagine this with the Cabba leader! He also has an auto that adds a marker to the card once per turn when your opponent activates an extra card. Playing into the style of the Gotenks leader we looked at above. He can add a counter using a +1 unison skill also. The skill allows you to drop two yellow and draw two. so strong, especially if you have a Saiyan Instincts in hand! His final skill is -4. It stuns all but two of your opponent's energy during their next charge phase. That's not bad at all!

Broly is much less wordy. He's very different in that he doesn't have any built in method of adding counters, so he's more a one and done unison card. He can switch an opponent's battle card to rest mode ignoring barrier, for free. His second skill is -1. It pops an opponents rested battle card with 5 or less. Nothing amazing, but not the worst value ever.

Finally, Bandai left us with another teaser of the SS4 Gogeta SCR that they initially teased in the first reveal video. We can now see he's the second SCR with 45k power, and also that his combo cost and power is 1+10000 (big surprise). I'm assuming this isn't a skill less SCR, so we will just have to wait to see what he does when they tell us more!

That wraps it up. Im exhausted from smashing this one out, so I'ma have a nap! If you would like to know more about Unison cards, have a watch of our knowledge video here:

We can't wait to see what's up next! Thanks for reading!

Australians, jump on The Midian Guard for all your DBS singles!l