Today we have a special blog post - A deck profile from one of Oceania's top players, Mickey Khanthisuwan!

Mickey likes to troll his locals by playing sub par leaders and still raking in those W's! This Gotenks deck has won multiple local tourneys in the current meta, which is super impressive!

Here's Mickey to take you through it!

Hi all, Welcome to my Gotenks deck profile! This is my favourite deck and is my go to every time I want to play something fun for locals purely because it allows me to play tokens (for which I use my signed waifu cards) to show the world how precious they are! This is a very aggressive deck as it utilises board spamming with a lot of 15k power tokens (waifus) on board and the leader ability to force your opponent to discard one card almost every turn.

So here we go! Lets start off with the leader 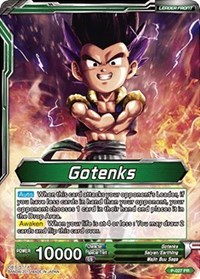 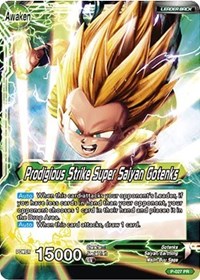 The Draft Gotenks leader allows you to play the main card of the deck – Super Ghost Kamikaze attack. It also has the ability to make your opponent discard every time it attacks a leader card if you have fewer cards in your hand than your opponent (which goes very well with how I build this deck to be more board spamming/less hand build)

This is the main card of the deck, it allows you to play 2 tokens (waifus) that have 15k power on TURN 2 which allows hyper aggro + utilising your leader ability. I run 4 of this card because it is the essential for my deck, allowing me to board spam from turn 2 onward with cards that are not easy to kill (unless they run the obvious dirty counters such as 4 drop Kale, Masked Saiyan etc)

This card is a very late game card for the deck which allows me to play 3 tokens with 5 energy + another 20k beater. It also gives all my tokens double strike if I have 4 or less cards in hand, which is very useful especially when I can all in my hand without champa and they would gain double strike from the Gotenks' effect

Now I want to talk about the 15k power tokens some more. Yes they are so precious but don’t underestimate them! They are 15k power naturally with NO energy cost, which mean that some of the best counters in the game do not affect them (Shocking Death Ball, Vegeta the Cruel, arrival Gogeta, 1 drop Kami’s auto). The ability to play them as early as turn 2 will put pressure on your opponent to kill them (with combo or 15k+ on board) otherwise they risk having 2 15k bodies to deal with the next turn.

This is the main self awakening card. You can play this on turn 3, use the effect to gain cards into your hand as well as a 20k body that can attack twice in one turn. Very powerful especially if your tokens are on board for more pressure.

There are only 6 turn 1 cards in this deck. I chose Cabba over crit Trunks because it has double strike which will make your opponent have more cards in hand than you turn 1 if you go second and Cabba's attack goes through (or they could waste two combo cards which mean they ditch even more cards just to stop leader effect LOL) then you can attack with your leader after and make them ditch an extra card (which mean they will either lose 3 life & 1 card from hand or 1 life & 2 cards from hand turn 1)

This is a very important card but it is also an extra card which is why I decided to only run two of it. The main reason for this is to kill the opponents 1 drops if they are 5k or lower. This deck has a very big counter in 1 cost Black Masked Saiyan (discard two if you play 15k or lower card with non keyword skill). That is why I run this card & the 1 drop Vegeta which allows me to kill their 1 drop and play my tokens.

This card is also there to kill 1 drop Black Masked Saiyan. Additionally it's a green card which allows me to combo with it to play arrival Gogeta. I don’t run many green cards in this deck that is why he is there instead of more Planet M2.

This is just another filler green battle card that has hidden effect against specific opponents (mainly zamasu and broly which run essential field cards) it is used as a arrival/green energy against non field leaders.

This card is used to get rid of blockers or more 1 drop Black Masked Saiyan. It is also filler for arrival/green energy. It can be played with just 1 energy as a 15k if your opponent has 2 or more battle cards. Basically a token for 1 energy.

Very good arrival card with 20k power, double strike and removal. This card can be used either offensively or defensively for just 1 energy. This deck has a mix of green and red cards which allows Gogeta to easily be played.

A free 15k if you played a Gogeta, basically another free token with hidden ability (see next card)

Ultimate cheese card in this deck. If you manage to get your opponent to 1 life (which is not hard with this deck) then play Gogeta into this card, activate alliance and deal 1 damage to your opponent, can catch the opponent off guard and earn a win in a very sneaky way.

A battle card that is also a very good counter. It can be use to ko a card and make them discard another card from their hand (very good effect especially with this aggro/hand destruction deck). It is a 5k combo green card so you can even charge this or use it for arrival.

Hands down the best super combo in the game. It lets you draw two cards then discard one from your hand which is very very good especially since you can discard any dead cards you may get in your hand late game (Planet M2, negate on the kill turn or any extra 1 cost combo cards).

This card gives double strike to any of your cards during the combo phase. Very good to use when you go in for kill since you have a board of cards that you can just keep attacking and pressuring their hand/life until it's low.

A 1 drop negate that is also a battle card, can use it to negate or as arrival filler.

Sometimes you will be tapped out with this deck. This negate is good if you have green energy open or no energy but getting attacked by triple strikes or big bodies.

A free card to play early if your opponent has cards on their field. Let's you neg one from your hand to play it for free then attack with leader to guarantee the discard effect. Also a 15k body that you can use to block or attack for more pressure.

I chose this card as my over realm card because it allows me to play it very early with just 3 cards in drop. It lets you draw two and then discard one dead card from your hand. Also a 15k power battle card for more pressure.

And there it is, my very aggressive waifu spamming deck! I have won multiple tournaments with this deck this set as well as the previous set (using a B/R build). It is very good especially when no one expects it. It has a very hard counter in senzu bean, 1 drop Masked Saiyan, token wipe cards and of course Mercenary Tao but no one should be running any of those at locals unless they decide to build a deck specifically just to counter you ;)

This is a very fun deck which allows me to show off with my precious waifus and catch them off guard with the aggressiveness! Don’t underestimate it!

Wow, what an interesting deck! I've been beaten down by it on multiple occasions, so it's not to be underestimated (at least in the right hands).

I'd like to thank Mickey for sharing his wisdom with us! I hope you enjoyed the deck profile.